Recently, there has been news of 28 people being allegedly made part of an illegal clinical trials in Jaipur, Rajasthan. These people had come from Churu and Bharatpur districts on being promised work as labourers. On March 19, they were kept in a hospital and given food followed by a tablet. They became sick after the drug was given to them and reported symptoms like dizziness, loss of consciousness, nausea and inability to urinate.

This post examines the various aspects of Clinical drug trial in India.

What are “Clinical Trials” ?

BRIC countries (Brazil, Russia, India and China) can execute trials at costs around half of the costs in the U.S. These countries have had a marked rise in the number of trials in recent years.  As per reports of clinicaltrials.gov, 1.4% of global clinical trials are done in India and the country has 16% of the world’s population and carries 20% disease burden in the world.

The history of drug regulation in India dates back to British rule when the majority of drugs were imported. The Indian Council of Medical Research (ICMR) was created in 1949 to guide and manage medical research. The first Drugs and Cosmetics Act came into effect in 1940 and was later amended as the Drugs and Cosmetics Rules of 1945.  This 1945 amendment established Central Drugs Standard Control Organization (CDSCO) and the Drug Controller General of India (DCGI).

A specific sub-Drugs and Cosmetics Act was developed, called Schedule Y, to regulate clinical research conduct. The Department of Biotechnology was created in 1986 to facilitate various aspects of biotechnology. ICMR issued the Ethical Guidelines for Biomedical Research on Human Subjects in 2000, and the CDSCO released the Indian Good Clinical Practice Guidelines in 2001. Together, these agencies assist the licensing authority in issuing final marketing approvals for products.

The structure and nature of the clinical trial process in India is exactly the same as those mandated by major regulatory agencies around the world. All applications are routed through various committees. In 2013, to address this sharp decrease, the DCGI developed a three-tiered regulatory process to review all clinical trial applications; while Independent Ethics Committees (IEC) or Institutional Review Boards (IRB) undertook a simultaneous review . The three key regulatory review committees were: 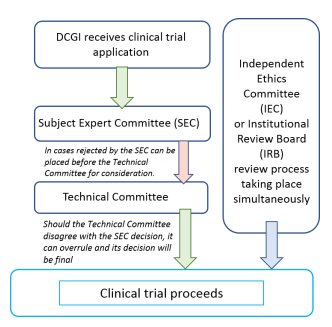 In a move towards e-governance, an online clinical trial submission process named SUGAM was initiated in November 2016

ICMR maintains Clinical Trial Registry-India (CTRI), a free online public record system for registration of clinical trials designed to track all ongoing trials. CTRI registration is compulsory before the first participant is enrolled. All trials running in the country can be found here in a public domain. The registry’s objective is to improve transparency and accountability, improve internal validity, confirm ethical standards, and report all relevant results.

Governance of Conduct of Clinical trials

Governance of clinical research conduct has been improved through a requirement for Ethics Committees. These ECs are required to be registered with the CDSCO. In November 2016, the Drug Controller General of India (DCGI) announced that accreditation of Ethics Committees would be mandatory from January 1, 2018. The National Accreditation Board for Hospitals and Healthcare Providers (NABH) and the Quality Council of India (QCI) have developed a system of accreditation for ECs and the NABH has started accepting applications for accreditation.

Issues with Clinical Trails in India 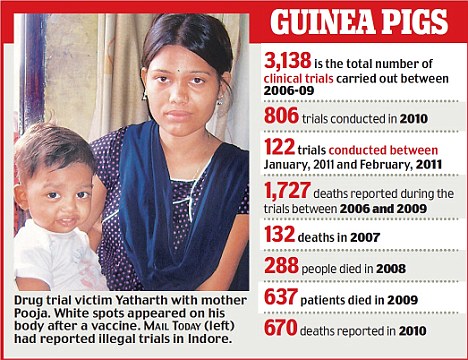 India, along with the African and some impoverished Latin American and Central American Countries leads the list of clinical deaths due to the drug trials. The trap of poverty and desperation that keeps people at risk of being exploited remains at the backdrop of this controversy in Jaipur.

As per rules, clinical trials in India have to be conducted in compliance with the Good Clinical Practice Guidelines issued by the Directorate General of Health Services under the Ministry of Health and Family Welfare. These include measures to safeguard the participants. Patients are provided full information about the trials and the risks involved before they are included in the trial. However in majority of the cases, the patients were not informed and did not sign the consent form. HPV Case: In 2009, it was revealed that 24,000 girls were enrolled in the Human Papilloma Virus (HPV) vaccination trial which, when investigated, was found to have irregularities in informed consent.

It is believed that between 2005 and 2012, about 2,800 patients have died across the country while participating in all clinical trials conducted by pharmaceutical companies.

In the recent Global Burden of Disease study published in Lancet, India ranked 154th out of 195 countries as far as access to healthcare and quality are concerned. Despite there being a large number of patients with varied conditions in the country, most clinical trials, unfortunately, still focus on ailments and have a western bias to their origin or numbers. The number of trials on indigenous innovative methodologies in the diagnosis, treatment and surveillance of disease typical to the Indian subcontinent are very few.

Following the disaster of 2009 (HPV vaccinations), it was realised that the compensation to trial subjects was an important area which needed a change.

Unethical practices of CROs: The companies outside India get there clinical trials conducted through clinical research organisations (CROs)—independent companies hired by sponsors to undertake clinical trials. They are chosen primarily because of their ability to form partnerships with local research organizations, recruit large numbers of participants and quickly conduct trials. However they are found to be conducting trials in most irresponsible and unethical manner. In 2011, CDSCO even suspended the licence of Hyderabad-based CRO Axis Clinically Ltd for recruiting illiterate women for a trial without obtaining proper consent.