The Battles of Idar were a series of three major battles fought in the principality of Idar between the armies of Bhar Mal & Rai Mal, the two princes of Idar. Bhar Mal who was supported by  Muzaffar Shah II (Gujarat Sultanate ) and Rai Mal was supported by the Rajputs under Rana Sanga. In 1517 Rai Mal with the help of Rana Sanga was able to successfully defeat Muzzafar Shah II and retake his kingdom.

Background of Battles of Idar: 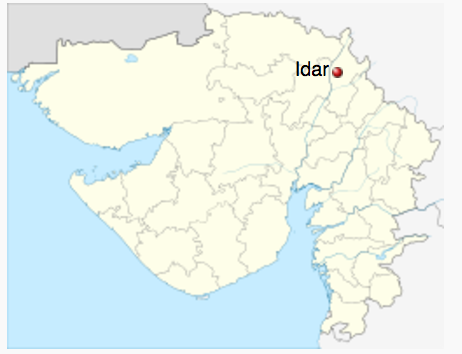 Idar, was a small Rathor Rajput principality situated on the borders of Gujarat. To its north was kingdom of mewar where Maharana Sangram Singh famous as Rana Sanga succeeded his father, Rana Raimal, as king of Mewar in 1508. South of Idar was the Gujarat Sultanate, which was at that time at meridian of its power and prosperity under Muzaffar Shah II.

Idar’s ruler, Rao Bhan, died, leaving two sons, Suraj Mal and Bhim. Suraj Mal succeeded to the throne but died after a reign of 18 months, leaving a minor son Rai Mal, who became the Rao of Idar. However Rai Mal was deposed by his uncle Bhim, who also died a few day later and eventually his son Bhar Mal, became Rao of Idar.

Rai Mal who had fled to Chittorgarh for shelter, made a claim on his patrimony with the assistance of Maharana Sanga. In 1514, first battle of Idar took place in which Rai Mal and armies of mewar under Rana Sanga defeated and expelled Bhar Mal from the throne of Idar.

Bhar Mal appealed for help to Sultan Muzaffar II of Gujarat Sultanate. When the envoys of Bhar Mal reached Muzaffar II, he sent Nizam-ul-mulk with an army to reinstate Bhar Mal on the gadi of Idar. In 1517, second battle of Idar took place and as per Ferishta, Rai Mal was defeated at Idar and he retired to the hilly tract of Bijanagar. Nizam-ul-mulk after reinstating Bhar Mal on the throne of Idar, went in pursuit of Rai Mal. In the subsequent battle that took place Nizam-ul-mulk was severely defeated.

Now, Bhar Mal occupied the throne of Idar and Rai Mal despite defeating Nizam-ul-mulk was situated outside Idar. A third confrontation was due.

In 1517 itself, Rai Mal, assisted by the Maharana Sanga, re-entered the Idar territory. The Sultan of Gujarat sent his general Zahir-ul-mulk, with a large army against him. Rai Mal killed Zahir-ul-mulk and slaughtered the Sultan’s army. The Sultan now sent Nasrat-ul-mulk, but he too failed to achieve any success against Rai Mal and was reinstated at throne of Idar.

Result of Battles of Idar:

The confrontation did not stop at third battle of Idar and Muzaffar Shah once again took Idar in 1520 leading to the Rajput Invasion of Gujarat in which Rana Sanga effectively weakened the Sultanates power by plundering its treasuries and by reinstating Rai Mal as the Rao of Idar.