The main Indian kings who contributed to the victory over the Arabs were: 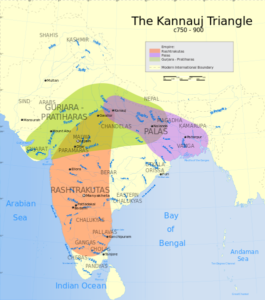 Realizing the power of Arab forces, Pratihara king, Nagabhata appealed for showing a united front with Jaysimha Varman of the Rashtrakuta Empire. Jaysimha  acknowledged and sent his son Avanijanashraya Pulakesi to support Nagabhata. The two forces, united with the already fighting Rajput forces under Bappa Rawal, at the border of Rajasthan.

The final battle of Rajasthan & Result:

The battle was fought between 5,000-6,000 Rajput-Gurjar Infantry and cavalry facing more than 30,000 Arabs. The Rajputs under Bappa Rawal managed to kill the Arab leader Emir Junaid during the war. In the words of the Arab chronicler Suleiman, “a place of refuge to which the Muslims might flee was not to be found.”

The Arabs took a long time to recover from their defeat. Junayd’s successor Tamim ibn Zaid al-Utbi organized a fresh campaigns against Rajasthan but failed to get hold  of any territories. Thus, the triple alliance of Indian Kingdoms saved Hindustan from Arab invaders, at-least for next 200 years.