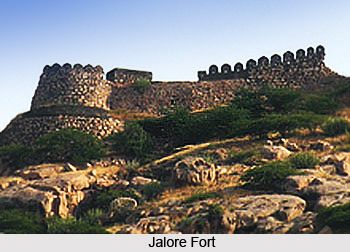 Allauddin captured Ranthombore (1301AD) defeating Hammir Deo in Siege of Ranthambore and  Chittorgarh (1303AD) by defeating Rana Rattan Singh through Siege of chittorgarh . He conquered the fort of Mandsore in 1305 AD. In 1311, Allauddin Khilji defeated Rao Kanhad Dev in Battle of Jalore.

Background of Battle of Jalore:

KANHAD-DE-PRABANDH, written by Padmanabhan, provides the details regarding battle of Jalore. It It is said that Firoza, a daughter-princess of Allauddin Khilji fell in love with Viram Dev, son of Kanhad Dev Songara, who was on attendance at the court of Khilji in place of his father. The Sultan called up on Kanhad Dev,  Viram Dev and put up the marriage proposal.  Considering the situation at hand, Kanhad Dev agreed to the marriage and on pretext of making marriage arrangements left for Jalore. However, the marriage was never unacceptable and on reaching Jalore, kanhad Dev started preparing for Battle.

Meanwhile, Allauddin had raised an expidition against Gujarat. In 1298,  Khilji’s Mongol general Ulugh Khan asked permission of Kanhad Dev to march through Jalore to conquer Gujarat. Kanhad Dev refused permission and Ulugh Khan had to take a longer route to Gujarat. In 1299 Khilji’s army sacked the Somnath temple and broke the Shiva lingam that had been worshipped there. He was carrying the broken pieces back to Delhi. When this news reached Kanhad Dev, he was moved and decided to fight for his belief and religion. Prince Viram Dev Sonigra,  son of Kanhad Dev  organized the attack to free the captured men, women and children. The broken pieces of the Shiva lingam were recovered and 20,000 Hindu prisoners were freed.

The Battle of Jalore:

The action of Songara father & son, enraged Allauddin Khilji and he attacked Jalore with a huge force of 50,000 men. Kanhad Dev with an army of 5,000 men defended Jalore and on going through the “ KANHAD-DE-PRABANDH ” it appears that Jalore resisted the invasion for 3-4 years before it fell. An insider at Jalore fort was bribed by Allauddin and he let the back door open to facilitate the entry of enemy troops of Turks. Rao Kanhad Dev with son Viram Dev fought bravely and sacrificed their lives for their country.

Result of Battle of Jalore:

Alauddin Khilji plundered the city and enslaved the populace. Mal Dev Sonigra, the younger brother of Kanhad Dev was the only survivor and rewarded by Sultan and was appointed as the governor of Chittore by Sultan. Jalore continued to remain under the sultanate until sultanate was overthrown.