In recently released, World Bank’s Ease of doing Business Report 2017 India stood at 130th position in the world. Now, a sub-ranking of India’s States on the same Ease of doing business 2015-16 has also been released and Andhra Pradesh and Telangana have jointly topped the list.

Important Observations from the Report: 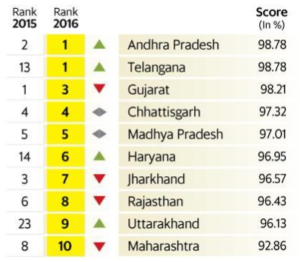 About Ease of Doing Business Index of Indian States:

Over the past two years, the government has implemented a host of reforms to make it easier for businesses to start, operate and exit. It is therefore disappointing that these achievements are not covered by the report due to methodological issues.