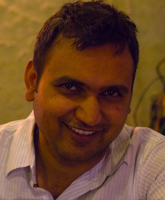 Hi, I am Jaideep Singh Shaktawat, founder of RajRAS.

After almost 5 years  of working for a Corporate as a Project Manager, I took a break from the job to prepare for civil services. After two unsuccessful attempts at UPSC civil service examination, I moved back to private sector with my startup in Solar Energy sector.

About the same time, notification of RAS 2016 was released and I thought of appearing in RAS examination and applied for the same. However, during next two months, I could not find any good material or online source (English Medium) that could help me with preparation for this examination. Coaching was not an option as it needed relocation, time & funds which I  being associated with an startup could not afford.

But soon I realized that the problem was not unique to me but to almost other aspirant considering preparation for RAS exam.

There are thousands of aspirants who do not have any source of income but need to spend significant money on coaching, relocation, books & other materials. Further, girls, housewives and other beings who could not relocate to join these few coaching available also suffered the same fate. Being an engineer, I could not look away from a problem without doing my bit towards its solution.

So in July 2016 (though very late for RAS preliminary 2016), I made my humble attempt towards solving the problem with RajRAS. Though being in startup, apart from money, I did not have the luxury of time also. However, as fate would have it, due to health reasons I was subscribed to bedrest for about two months. Since working on Solar from bedrest situation was not working out, RajRAS became the saviour.

I started writing & consolidating information on Rajasthan without any thought but was overwhelmed by the response I received and decided to continue building the platform with whatever & however I could. What started as a simple blog platform, with support of fellow authors, friends and users has transformed into a credible knowledge-base on Rajasthan with more than 3 Lac monthly users.

We are making an humble attempt to build the platform everyday and welcome all support, constructive criticism, interesting ideas & suggestions to make RajRAS more useful.

Please, mail your thoughts at: jaideep@rajras.in.