The 2016 Nobel Prize in Physiology or Medicine has been awarded to Yoshinori Ohsumi of Japan “for his discoveries of mechanisms for autophagy.” 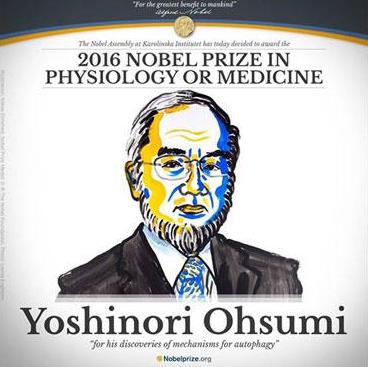 In 1963, Christian de Duve, coined the term Autophagy (meaning “self eating”). It is the fundamental process for degrading and recycling cellular components.It was observed that, the cell destroys its own contents by enclosing it in membranes, forming sack-like vesicles that were transported to a recycling compartment, called the lysosome, for degradation.

However the process of Autophagy was known long before Yoshinori Ohsumi ventured into the field, but it was his paradigm-shifting research that revealed the importance of this fundamental process that comes into play every other minute. His seminal work helped reveal that vacuoles in yeast and lysosomes in human cells are not just garbage bins but recyclers and fuel producers. Right from the stage of embryo development to countering the negative effects of ageing, autophagy plays an important role.